The rules forbidding gay men from giving blood are getting a review. It will mean an end to the previous ban in the United Kingdom.

Prominent doctors in the United Kingdom welcomed the research and the results.

Currently, [2015] gay males must abstain from sex for a minimum period of 12 months before they give blood. The same ruling applies even if they use protection or are in a long-term relationship.

The logic behind the restrictive ban got introduced following the rise in HIV cases. But, many bisexual and straight heterosexual lobby groups, including British doctors, questioned it.

The UK seems set to follow the dropping of the ban by the French Health Ministry. They announced that they will lift their 30-year ban.

At present, according to the United Kingdom National Health Service, you should not donate blood for 12 months after having sex with:

The Public Health Minister confirmed in the House of Commons that there would be a review of the issue. She went on to say: 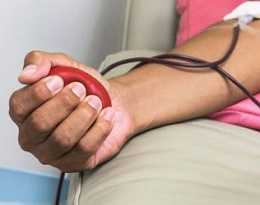 "Making sure that the blood supply is safe is an absolute priority. The UK blood donor rules on deferral for men who have sex with men changed from lifetime to 12 months in 2011. But, four years later it is time to look again at the question.

Public Health England has undertaken an anonymous survey of donors. The Advisory Committee on the Safety of Blood, Tissues and Organs will review the issue in 2016.

The blood service does not discriminate on sexual orientation. The deferral period gets based on sexual activity. It applies to several other groups other than only men who have sex with men."

One of the Conservative MPs (Michael Fabricant) wanted to know why it was taking so long to lift the ban in the United Kingdom.

She confirmed that the safety of blood is paramount. But, many clinicians feel that a review on gay blood donation is long overdue. We may finally achieve equality in this matter.

A spokesperson for the equalities group Stonewall expressed their delight in the announcement. A fair donation system based on up-to-date medical evidence is the right way to move ahead.

They fail to see why straight people who may have had unprotected sex can donate. They suggested that current rulings are unfair. They want to see an accurate assessment of the risk of infection. That should be irrespective of sexual orientation.

Articles on Health and Safety: Topical stories about health regulations and safety rules.
Asthma Inhalers: Medical experts call for an industry-wide standard for inhaler colour coding.
Blood Donation Rules: Donor rules for gays and sex workers changed in England from 2018.
Health and Wellbeing: A guide for taking charge of your own physical and mental health.
Synthetic Alcohol: Is hangover-free alcohol key to safer and improved mental health?